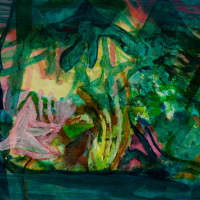 A Pre-recorded Course Once registered, students have access to the films for as long as you need.

A 3 day course during which you will ‘construct’ three large (A1+) paintings( on a choice of supports- stretched canvas, MDF or ply board, or Heavy duty paper), using visual material gathered from a variety of sources. You will be asked to choose an outside space as your subject matter or resource, such as your garden, a local park or nearby wood. This visual material will include the making of quick drawings and paintings on paper, recording interesting forms, light and shadows, and the collecting of any objects and artefacts that would present interesting shapes and forms to work from. This accumulated visual matter will then be used as the starting materials and basis with which to embark on the three larger paintings, which will be made by employing a whole variety of methods, including- collage, experimental mark making, glazing, and paint transfer methods.

The intention of the course will be to look at ways in which painting/collage methods can be used to make something that constructs a space or spaces within a painting, capturing an essence of a place rather than creating an illusionistic ‘view, of it. We will explore the idea of a painting being both something that can both evoke the feel, or atmosphere of a place without trying to depict it in a literal way, whilst also trying to make something that functions as a self-contained thing in its own right. Its existence justified by its own internal ‘visual poetry’. You will be encouraged to think about painting in these terms during the course.

The three paintings will be worked on simultaneously in order to avoid the idea of ‘a final finished piece’ to ensure experimentation is not hindered by preciousness in the later stages. The purpose of the course, is not to make a great painting (although that’s not to say you won’t), but rather to explore paintings exciting potential through the myriad of exploratory visual processes it has to offer.

"Joe introduced me to the notion of ‘constructing’ and re constructing a painting in a way that I hadn’t thought of. This expanded my thinking and practice by giving me permission to use the tools I had and some exciting new ones to create, change, add, move and layer with greater ease and fearlessly."